When lived experiences are reimagined to create a human-driven tech platform. Learn about the origin of triiyo from the words of our CEO and founder, Rebecca Grainger. 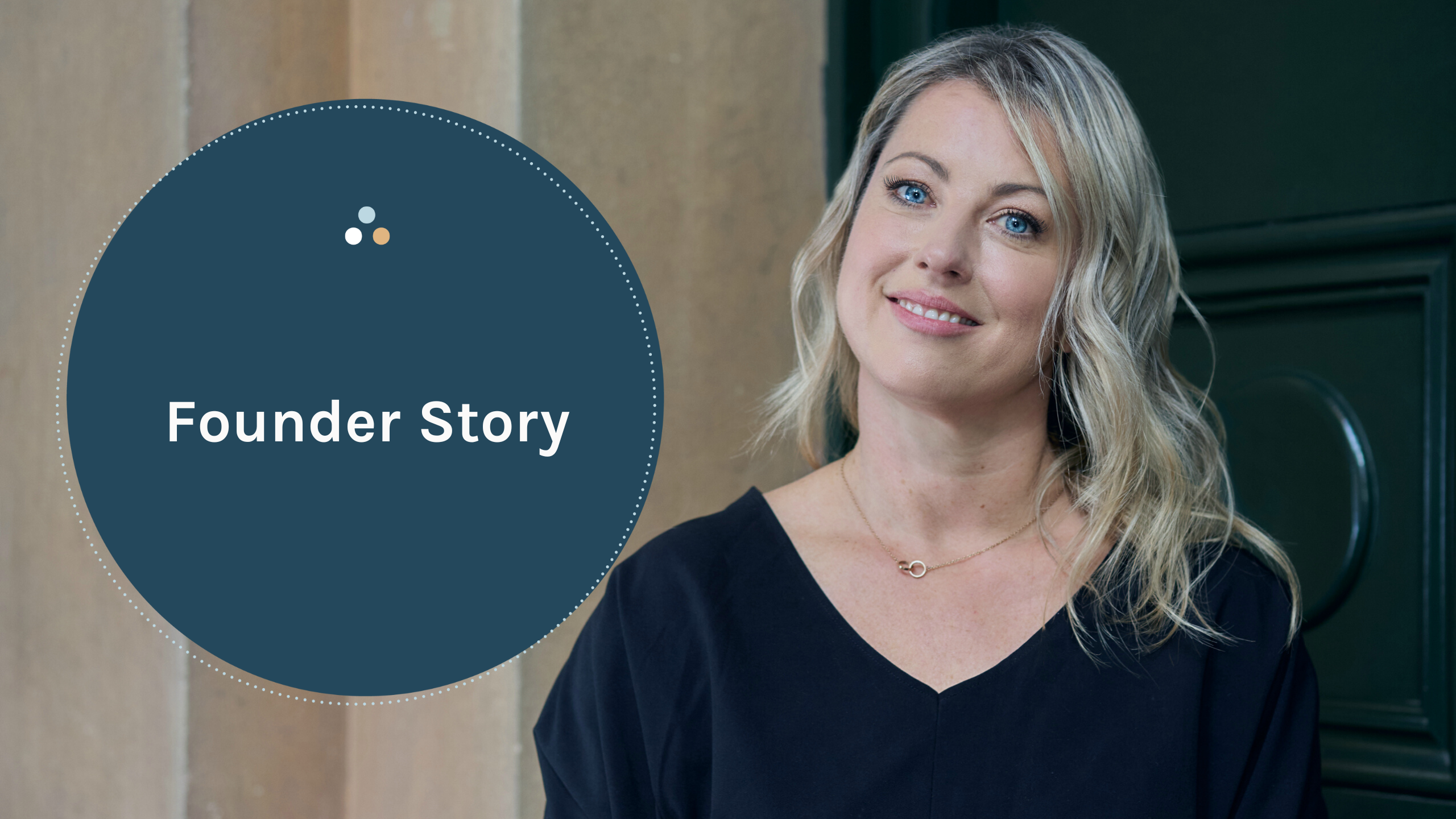 triiyo, a tech platform that drives human interactions, is the culmination of a life-long passion for wellbeing, connectivity and a series of learnings from founder Rebecca Grainger. This is her personal journey as a solo female founder and working single parent.

Moving to Australia in 2010 from the UK, Rebecca worked in one of the world's top recruitment firms. A year later, she moved to a boutique firm, newly married and began plans to have a family. With her future mapped out, she felt in control of her life, career and direction.

"Life was typical, with the normal dreams of enjoying a fulfilling career combined with happy family life."

In 2014, after announcing her pregnancy, Rebecca resigned after a less than positive experience. “Having experienced a pregnancy loss in the previous year, my focus was looking after my health and stress levels, sadly it became evident that I didn’t have the support of management so felt the only option was to move on.”

Unable to find a new role while pregnant, Rebecca began career coaching which was the first step in the creation of triiyo. "The people who came to me were all women, either on maternity leave, or had returned to work post-parental leave. In all scenarios, they were professional and ambitious women who were feeling disengaged and disconnected from their employer.”

Having spent her career in recruitment, she innately understood the cost of attrition and consequently how beneficial it is for an employer to retain their people. During this time it became evident that disconnection and lack of engagement were the main reasons women were looking for a new employer. “They had lost their sense of belonging at a time where they were already grappling with adapting to a new identity as a new parent. I felt if I could help organisations and managers to remain in contact and keep new parents feeling connected to their employers, then we could reduce this negative experience during parental leave and create far more compassionate workplaces.”

“What really mattered to all these women was to know they hadn’t been forgotten and were still valued employees, albeit on a period of leave, but still part of the team.”

This was the very beginning of triiyo.

In 2018, Rebecca came across a Tech Accelerator called BlueChilli who were accepting non-technical people into a new program designed to help budding entrepreneurs build tech businesses. Rebecca applied for their accelerator program and was invited to attend their annual rapid validation boot camp.

By the time she joined the Bluechilli cohort in 2018 and began bringing her vision of triiyo to life, she had gone through another life transition of divorce and becoming a single parent.

BlueChilli was phenomenal in helping Rebecca figure out how to establish triiyo as a technology product. triiyo quickly went from an idea to building a pilot program for four corporate clients in Australia. "Their support in those initial stages meant we could build and test triiyo with real customers and launch our product into the market in record time."

When triiyo launched their MVP in June 2019, they were the first gender-neutral parental leave platform supporting all parents under the belief that families were made up of different shapes and sizes - acknowledging that anyone within a family unit could use support. “I knew triiyo needed to address parental leave equality because without including all parents, specifically fathers, we would never normalise parenting at work and remove the stigma for parents in the workplace, and we would continue to exacerbate the gender pay and super gap."

The business was growing, and with an expanding client base, triiyo was moving into a new phase when the pandemic hit.

"Suddenly, the whole world stopped. Bluechilli closed its doors in Australia and I had no idea when the uncertainty in the market would end. I threw all my energy into triiyo and spent my days talking to our pilot customers, examining what they liked or didn't like about our product and how we could offer more support during this time.

It quickly became apparent that connectivity and staying in touch with people wasn't just synonymous with parental leave - it could be applied to every work-life transition."

The pandemic inadvertently forced triiyo to pivot for the better and helped clients understand the importance of connection after the world had been through a period of isolation and disconnection due to lockdowns and remote working. With a new CTO on board, triiyo was ready to take on a new direction, to become the most comprehensive connectivity solution workplaces need to look after their people through every life stage at work.

In the middle of the pandemic Rebecca secured an Angel Raise in 2021, and the team redesigned and rebuilt the platform, with the focus of empowering workplaces through human connection.

The core value and purpose of triiyo is human connection. It supports an employee-first approach to people management and ensures workplace culture and their people, can thrive during times of change and transition. With an ever-growing team, triiyo’s continual development in their technology helps employers across Australia show their people they genuinely care by delivering immediate employee benefits.

"As someone who has experienced a myriad of life events over five years, many outside of my control, I deeply understand what people need during these times, and it’s not to feel isolated from my employer or team. My job was the one consistent feature that maintained my sense of stability. When life is in turmoil, don’t underestimate how powerful work can be in maintaining one's sense of normality. When employers or managers disconnect and leave employees on their own during these common, complex and often messy life events, they can exacerbate the problem. Work for me was my safe space in which I could throw myself when other areas of my life around me were falling apart."

"Just because my personal life was in a transition period it didn’t mean I wasn’t productive or effective at work. During my divorce, becoming a single parent and living through a pandemic, triiyo went from MVP to being Angel funded. At this time, I realised in our most challenging periods, it is the power of human connection that influences positive outcomes, and that is our mission at triiyo."

"We're a technology company focused on human connection to improve employee wellbeing, engagement and retention through every life stage at work. Initially, I started the company with the mission to help parents navigate parental leave, keep more women in the workplace, and help close the financial gap for women by promoting a gender-neutral parental leave solution, but the solution has evolved over time. At our core, we are about improving connectivity through human connection in the workplace, by empowering organisations and enabling managers to care for their people, with ease through the entire work-life cycle."

In the current climate of global talent shortages and a sharp focus on employee wellbeing, employers should have their people at the heart of their growth strategy.

"Life happening at work needn't be career limiting for the employee or a headache for the employer. In the world we're living in today, we've all experienced isolation and disconnection, health concerns, plus challenges in our lives and changes in the way we work. There is nothing more powerful than human connection to drive positive outcomes. Adopting these changes is not only an effective solution to people management and providing care for our people, but it is the right thing to do. With our simple, streamlined solution, everyone benefits."

triiyo is an employee-centric, connectivity platform that simplifies the way people connect and communicate during life transitions at work. The centralised platform provides a safe space for employees to confidentially access support, connect and share information throughout the entire work-life cycle.

triiyo’s mission is to connect the dots between life and work for happier, human workplaces.

Focused on employee wellbeing, engagement and retention, organisations are able to prioritise the employee experience by supporting both managers and employees via automated and tailored Journeys, Communities and an expertly curated Resource Hub. triiyo partners with progressive HR professionals and innovative companies.

Speak to us today to find out about how we can support you and your employees through parental leave, remote working, and other challenging work-life transitions.