Our founder Rebecca discusses the value of removing primary and secondary carer and making parental leave available to all parents (equally) as a starting point to driving culture change for parents in the workplace. 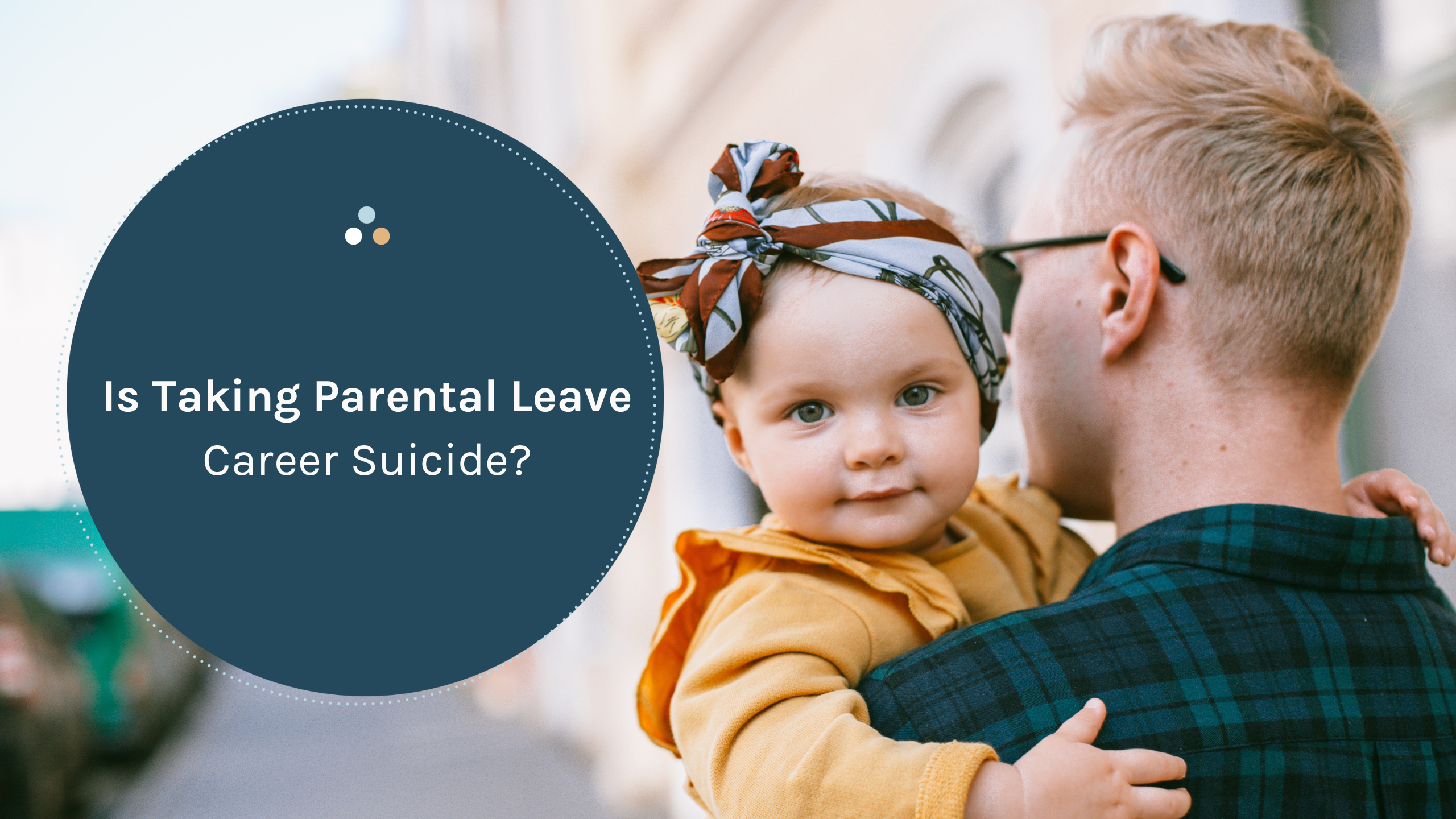 Taking parental leave can be career suicide. But it doesn’t have to be.

Many employees hesitate to take the parental leave they need because they’re worried it will hurt their career, that they’ll lose their position or get demoted, and that they’ll be passed over for raises and promotions.

Women have experienced this, but with the push for parental leave equity, men are also realising it's not an easy ask to take leave and maintain a career.

That means women are taking 99.5% of paid parental leave in Australia.That’s an astonishing number. But why? Why are so many women leaving work to take care of their newborns, whilst their partners continue to work?

And perhaps more importantly, why are so many women not returning?

The answer is complicated … some factors are physical, some cultural, some economic.

Of course, we women are physically bound to our babies. Giving birth is hard. Hard on our bodies, hard on our minds, and it takes time to recover – both physically and mentally. Baby fog is real!

And for those who are able & choose to breastfeed, that’s also a consideration. Finding time and a comfortable place to express at work is a job in itself.

Plus, there are the ingrained cultural stories that tell us women should be at home taking care of their babies and performing domestic duties.

Another major barrier is the high cost of childcare. The childcare subsidy helps, but for a lot of women – especially those who earn less than their partners – many feel it’s not worth losing valuable time with their babies just to have the majority of their wages going to pay for childcare.

Australia has the fourth most expensive out of pocket fees for early childhood education and care in the world – resulting in many women not returning to the workforce, sacrificing their career and financial security in the process and, consequently, a lack of female representation in senior leadership roles. [4]

Bottom line is that the cost of childcare is prohibitive to women returning to work but when they do, childcare needs to be seen as a family cost, not a woman's cost.

Taking a break to care for children can mean falling behind – getting passed up for promotions and wage increases, and losing valuable contributions to superannuation – and when returning after a long gap, being seen as having lost skills and focus.

Balancing work with the responsibilities of caring for a new baby or taking time off to care for a sick child often falls on the mother, because women typically earn less or their careers become second in importance to their partners. Historically, we have seen women's careers falling off a cliff when they do take this chunk of time out of the workforce.

Often, when couples have the conversation about who will take what parental leave the woman ends up taking the majority of leave. And if she does return to work, it’s often part time.

Many companies still only offer ‘secondary carer’ leave of 2 weeks  at minimum wage. When women are labelled as the “primary carer,” by default their career is demoted. They continue in the main caregiver role and many come to the conclusion that it’s not financially worth going back to work.

Even when fathers do have access to generous parental leave, they often don’t take it, because leave pay is too low, and they’re worried taking time off will damage their careers.

85% of men surveyed in a 2021 report by Dove Men+Care and Promundo said that they would “do anything to be involved in the first months of their child’s life.” But only half took the maximum leave they were allowed. Top reasons for this included “Social norms, financial pressures and lack of managerial support.” [5]

Research conducted by Impact Economics and Policy found that the top reasons for the workplace participation gap between men and women include:

At this year’s Jobs And Skills Summit, Job Summit, SafetyCulture CEO Luke Anear rightly said, “No woman in Australia should be unable to work due to caring for children.”

And Equality Rights Alliance’s Helen Dalley-Fisher said, “We can’t keep asking women to babysit the economy. We can take steps to improve women’s workforce participation rates, but most women are working full time already. We’re just not being paid for it.”

So, what’s the solution?

It takes a village

It does take a village to raise a child. And I’m not just talking about family.

Child development outcomes improve when dads are actively involved in caregiving, and, “We know that mums do better in terms of their mental health, but also in terms of economic security when dads are empowered to share the care … And we know that dads themselves have improved mental health when they are supported to stay home with their children.” according to The Parenthood’s Georgie Dent. [7]

Dads being more involved doesn’t just benefit their families – it benefits the economy. The Grattan Institute proposed a change to parental leave that would include 6 weeks of “use it or lose it” provisions for each parent, and 12 weeks for them to use as they see fit. [8]

According to Wood and Emslie, the new scheme would cost an extra $600 million a year, but increase GDP by $900 million a year due to increased workforce participation by mothers. [8]

And a report commissioned by The Parenthood estimated that lifting women’s participation in the workforce to be equal to men’s would “increase GDP by 8.7 per cent or $353 billion by 2050.” [9]

Organisations can step up to help new parents – both men and women –  firstly by removing primary and secondary carer labels, and secondly by creating a culture of care, connection and compassion that de-stigmatises parenting at work.

Employers can also help by staying in touch with parents on leave. Status quo has been that when parents go on leave they have little to no contact with their teams, so they often return from leave and find they weren’t kept informed of changes within the workplace.

Stay in touch platforms like triiyo can help employers and parents on leave proactively plan for what will happen before, during and after parental leave – with a news board, community chats, and even a buddy system – so parents on leave know what’s happening at work and what to expect when they return.

From March next year, the Federal government is increasing parental leave from 18 weeks to 20 weeks … and they’re giving parents the flexibility to decide how they’ll split up the 20 weeks. And the income test will change to be a combined household income threshold of $350,000 per year. [10]

This may end up meaning that the mum will take all of the leave herself, because dads are no longer incentivised by the “use it or lose it” provision. [11]

But I’m hopeful that this new flexibility will enable more dads and non-birth parents to split the time more equally, so dads can get involved earlier and for a longer period of time to have a chance to really bond with their babies … and give mums a chance to rest and recharge.

How can I support my employees?

As a manager, it's critical to have honest conversations with your employees early on.

Because of the historical stigma surrounding pregnancy and caring for a newborn, many women are hesitant to announce their pregnancy early for fear of losing their career momentum or being discriminated against. Consequently, this isn’t helpful for organisations or people leaders who manage teams and want to maintain business continuity.

Opening up  lines of communication and being very clear that pregnancy and parental leave are not just normal but should be celebrated and encouraged can completely change when and how that first conversation happens.

Encourage your employees to speak with everyone involved – their colleagues, their partner, and their family – to build a clear roadmap for how they want to be supported and communicated with in those early days. And help them build a clear plan for their career when they return to work.

Things may not go to plan (I mean, they probably won't), but having clear expectations, an understanding of what they want, and open lines of communication will enable you to pivot as they adjust to life with their new baby.

Lead from the front

As a leader, you can also change the conversation by leading from the front. Normalise taking paid parental leave by encouraging all parents to benefit from your current policies. The sooner there is greater uptake, the sooner parenting is destigmatised.

Don’t talk about parents as primary and secondary carers. They may take on different roles over the course of the child's life, but both parents are equally important to their child. Framing the conversation about primary vs secondary caring minimises the contributions of one parent and makes them less likely to take an equal amount of time off.

Share the joys of those early days, encourage your team members to share photos and announce the birth of their child to their team and, if they are keen and it’s safe to do so, set up office visits so they can bring their new baby into the office or meet over video chat.

If you’re a manager looking for tips on how to develop or improve your parental leave program, you can download this Best Practice Guide for free.

And if you’d like to see a demo, please reach out to my team at hello@triiyo.com or book a time to speak to us here.

With a professional recruitment and talent management background, Rebecca has a deep understanding of the value of human capital and the importance of employee engagement and retention.

She believes that human connection is needed more than ever and that organisations can play a key role in ensuring their people are supported through all life stages from hire to retire. In simple terms, triiyo equips organisations to support the "whole self" of every employee.

triiyo is the workforce connectivity & people management platform that helps companies engage and retain employees before, during, and after leave periods like parental, carer’s, mental health, menopause, retirement, and more.

triiyo includes a library of resources, curated by experts, accessible by all at any time. Their external platform provides a safe, proactive space for people to seek advice and support, confidentially, anywhere.

Their simple, automated tool guides managers through every step associated with complex workplace transitions. triiyo removes the guesswork, ensuring each employee has a consistently positive experience.